Help this game reach its goal

Buy the printed version of the game here!

Corvid Court is a tabletop RPG about bad people doing bad things. There’s no way around it, you’re the baddies here. But the city of Nest is filled with lots of vile people, so “bad” is relative. Sometimes, bad people do good things. Sometimes...

The players of this game, called Birds, are part of an organization known as the Corvid Court. The Court, for short, does dirty work for people who want to keep their hands clean. The Birds take on jobs, and the GM will play alongside them to see what happens along the way. Oh, and are you actually playing as birds? Probably not, but that’s up to you to decide.

You can find a copy of the new character sheet for you to print here.

The physical prints are now available, and in limited numbers! You can find it on my website.

In order to download this game you must purchase it at or above the minimum price of $3.75 USD. You will get access to the following files:

Support this game at or above a special price point to receive something exclusive.

If you are in need and would like a PDF copy, please grab one, no questions asked.

If you grab one, consider giving the game a 5 star rating!

Managed to snag myself a physical copy, international shipping be damned. Bad people, birds?!, doing bad things to worse people, I cannot tell you how well that plays to my gaming group. The stripped down Resistance system is really nice, I'm a big fan of both Spire and Heart. Will drop some more thoughts when I've got some actual play to discuss.

honestly adore this concept! want to play this so bad, but i wish there were even a few sentences to prompt ideas for one shots as it feels a little like getting dropped in the deep end.

I think you should be looking to take inspiration from your favourite hardboiled crime media, whether books, movies or TV.

Off the top of my head, the following come to mind:

* The Sopranos
* The Wire
* The Shield
* Any amount of Quentin Tarantino movies but especially Pulp Fiction and Reservoir Dogs.
* Classic noir fiction by Raymond Chandler and Dashiel Hammett
* Some personal favourites of mine include Smokin' Aces, and Shoot Em' Up.

Classy. Special love for Kumada's pun ("you have to wing it") and the surreal atmosphere of the game.

Hi! I bought the game on DriveThryRPG some time ago, and I was wondering if you could upload the files on there as well? Cheers :)

Hi! I just put the new files up on DriveThru. Enjoy!

This is a 15-page medium-weight game where you play as a literal and figurative murder of crows. It runs on the same engine as Spire (it'll also look and feel familiar if you've played Blades In The Dark,) and the rules feel light and easy to learn but also have some genuine heft to them.

There aren't a lot of GM resources, you kind of just have to wing it, but it's also not too difficult of a system to do that with. There *are* guidelines for the building the city of Nest, and they imply a lot of great lore, but you'll have to fill in the specifics yourself.

On the player end, things are really smooth and fun. There's seven backgrounds and four classes and further customization beyond that. Everything is really flavorful and gives PCs a lot of agency, but not quite unlimited narrative power.

Overall, if your table likes Blades or Spire, or stories like Gentleman Bastards or Best Served Cold, or games like Dishonored or Thief, I would highly encourage picking this up.

-Class Abilities giving you Skills and Domains feels a little weird. Do you get to change them out for something else if you already have them?

-How long does the Jay's mask ability last? If it's indefinite duration, that feels like it justifies the 2 stress cost.

-Jay's "speak a sentence and it's true" feels like it has high abuse potential if pointed at another PC. Maybe a limitation that focuses it on environmental details would help?

-Jays' core ability also feels a bit extreme, especially since 'die' is a single word. Even a 1/session limitation would check it.

This might be a super dumb question, but I could do with a little clarity on rolling for fallout.

As I understand, you roll for fallout every time stress is taken and, as you get more stress, it gets more likely for fallout to occur. If that's correct, then how many dice should I be rolling for the fallout check?

You don't roll separately for Fallout. Instead, anytime a Bird rolls for an action and takes stress, they compare the highest rolled die with the amount of stress they have the the track.

So let's say a player is only rolling 1d6 for an action, and gets a 4. They mark stress, and then check the highest die in the roll (4 in this case since it's the only die), and would compare it to their current stress score to see if they trigger Fallout.

So to reiterate, no separate rolls for Fallout, just check it with the roll that triggered marking stress!

Happy to help, enjoy the game!

Hi! I have a question about the Jay's fourth ability, where you can speak a sentence and make it true - how would you rule that so that it's not totally broken? I feel like it could spiral out of control. Love the game though, the updated version looks beautiful!

Haha, I suppose if someone wanted to they could abuse the Jay's ability to break the game.

I wouldn't personally come up with a specific wording or ruling, because the game is meant to be open to a lot of creativity and interpretation. I would instead just have a conversation as a table if the Jay wanted to break the game, and instead ask them to try something that is still fun for them, but also doesn't ruin the experience for everyone else.

Glad you like the look of the new version, thank you for the kind words!

That makes sense, thank you for the response!

I was just discussing the game with some friends cause I'm planning to run it soon, and one of them brought up the ability - thought I'd get the developer's word on the matter.

Thanks for clarifying, that  was basically what i was planning to do if the ability came up too so it's good to know I'm thinking in the right way!

We're on the same page! Have fun being bad, bad birds.

Hi! I'm going to run the game tomorrow because I just fell in love with the style! My players were a bit confused about the updated rules not containing an updated character sheet, but apart from that we're all set to play, looking forward to it a lot!

Hi! Happy to hear you're going to run it, I look forward to hearing what you think.

As for the character sheet, I've just updated it!

A very interesting take on the Resistance system, with simplified rules that seem well thought-out. The premise of the game is very promising—perhaps too heavy on rules and not enough on setting for my tastes, but it works!

Thanks for the kind words about the game. I just made the old files visible again, so you can grab them if you want!

Thank you so much! I'll gladly leave the old files up for anyone who wants/prefers them.

The system is easy, and the game is fun. :D Kawkaw. Buy it, feathershead. By the way, the illustrations are goods. Love it. Kaw.

Thanks for your kind words, I hope you enjoy the game!

Yeaaaah it was a risky name to go with

Something about the flavor got me really hyped about this system :D

Happy to hear it, hope you enjoy!

I'm trying my hand at GMing for the first time and decided to base it off corvid court! It's a really intersting setting, I'm just a bit stumped on combat, how did you imagine it working? From both the players and the opponents side.

Awesome! Good question, and that's something I'm addressing in the updated version that should be up soon. I'll post what I've got so far here so you can use that. Long story short: combat is incredibly fast and brutal, should just be 1 roll.

"So what happens when a Bird decides to hurt someone? You’ll most likely be rolling Murder, plus any relevant Domain depending on the target or location. NPCs don’t have hit points to whittle down here. The assumption is that if you try to Murder someone, and you succeed, they are murdered. This is especially the case for most run-of-the-mill goons out there. If you are facing a particularly formidable or dangerous foe, maybe you have to hit them a few times before they drop. But I’ll let your GM decide that."

Nice! Thank you so much! I'll base it off that then, and I look forward to reading the updated version!

Some of the pages in the character sheets have an extra vertical line obscuring the text. If you can fix it'd be great. Going to try this on Roll20 as a one-off.

Thanks for the heads up! I've just uploaded the fixed sheets. Can't wait to hear how your session goes!

Thanks for that, I shall schedule it for when I take some leave.

This puts me in mind of the Court of Owls from Batman.

Oh neat! I never read a lot of Batman before, but I know what I'm going to read this week now :) 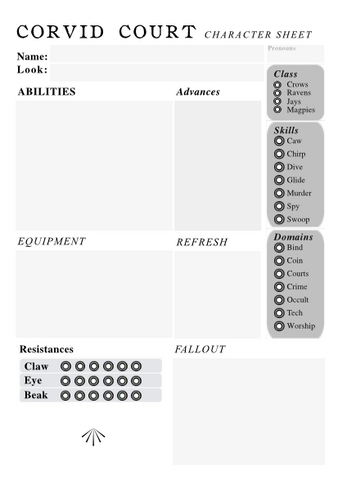 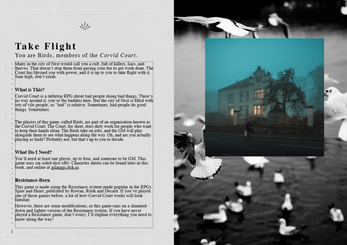 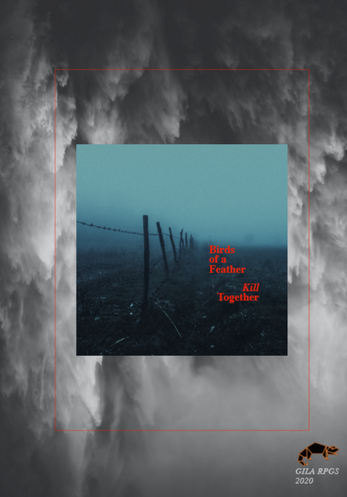 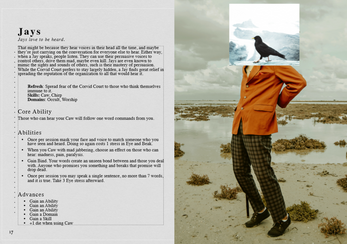