Nominated for two ENNIES including Best Layout and Best Rules!

NOVA is a rules-lite tabletop RPG in a world where the sun exploded, and humanity struggles to hold onto what little light they have left. The players will pilot exosuits, called Sparks, exploring the dark ruins of old earth, searching for the technology and knowledge that may just bring on a new dawn.

NOVA uses the LUMEN system, which is designed for action-packed combat, equipping the players with a set of powers that bring the power fantasy feelings of looter shooters to the tabletop.

Players will each choose a Spark to pilot, specialized exosuits designed to explore the dangers of the Dusk. Each exosuit was designed by humanity to serve a particular function, and the LUMEN system equips the players with a set of powers and abilities that allow them to excel while on their dangerous missions. 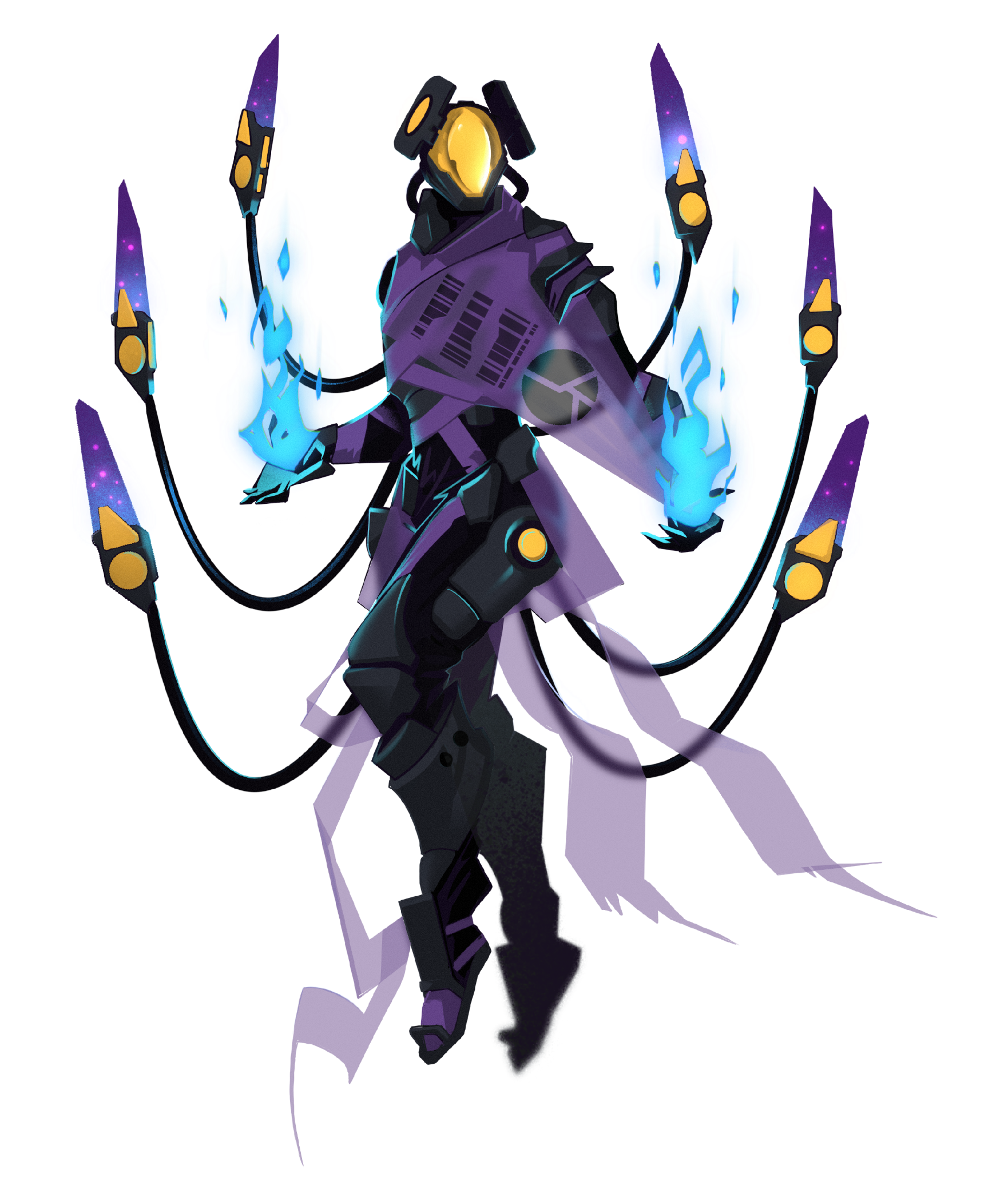 Players roll pools of six-sided dice based on how they are acting in the world, rather that what they are doing. That means there are no skill or action lists. Instead, each player has three attributes that describe how they might accomplish a task. 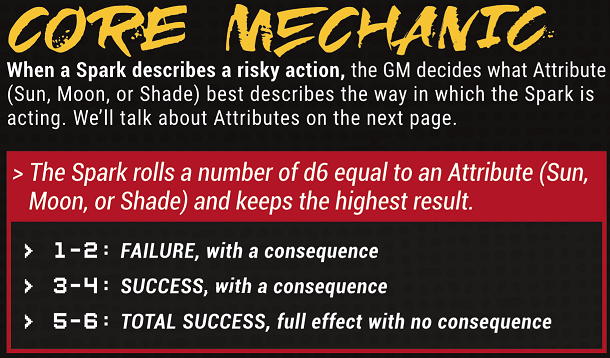 Combat in NOVA is frenetic, and the players are encouraged to unleash devastation on every enemy that comes their way. The rules are designed to keep fights moving quickly, while also keeping the Sparks powered up and always ready to bring their worst.

To keep things as quick as possible, players don't even need to roll dice during combat. Instead, they need to carefully manage their Fuel, a resource that allows them to unleash their terrifying powers. As foes are taken out, they drop valuable resources that replenish health and Fuel for the Sparks. This keeps the combat moving quickly, and the Sparks feeling deadly.

As the Sparks complete more missions, they will unlock Mods that make them even more powerful. Some mods provide persistent bonuses, while others can be equipped to your powers, allowing you to customize how your Spark acts in the field.

"NOVA is immediately powerful and (literally and metaphorically) punchy. The action and combat is fast and streamlined, but power sets synergize in exciting and tactical ways to create plenty of depth for those looking for it. I already want to play more of it."

"Spencer Campbell's Lumen system seamlessly loads the vibe of the looter shooter genre onto any tabletop. NOVA overclocks & ignites that system into a game of shared world-building that gets players into missions & mayhem in a flash."

- Tony Vasinda. Plus One Exp.

"Five minutes into playing NOVA and the battlefield was a blazing inferno of fire, the sky was full of homing missiles, and a Spark was running around wrecking enemies with a HOT SWORD. If that's not the coolest thing ever, I don't know what is."

Check out these Actual Play videos of NOVA being played!

You can find the ongoing collection of 3rd Party NOVA content here.

Want to make your own 3rd party NOVA content? I've released the completely free NOVA Creator Kit with advice on making things for the game, as well as a template you can use for making your very own Spark.

Want to see a real quick overview of the game? Check out this  video done by 11dragonkid. Everything you need to know about the game in under 6 minutes.

If you enjoy NOVA, please consider leaving a 5 star rating here on itch. It helps get the game in front of more folks!

In order to download this roleplaying game you must purchase it at or above the minimum price of $20 USD. You will get access to the following files:

Is there any chance of a more EU friendly shipping option of the harcopies any time in the future and/or a reprint of the hardbacks?

I don't have any connections with EU retailers right now, so unfortunately fulfillment still comes out of the US. There will be a reprint in the near future.

Would you like some suggestions for a mail blast to? I think there are plenty that would be happy to stock your games.

If you're in the UK,  Secret Cat shop have it in stock

Alas, the UK isn't in the EU any more, so shit's a lot more complicated.

is there any chance that the character sheets could be made separately available as a pee dee eff? i have the hardcopy of this (its lush btw) and want some sheets to print without risking cracking the spine

Just got those sheets posted here so you should be able to download them now!

I highly recommend NOVA to you guys who loves combat teamworks and fast paced action, yet still really light and easy to play for the players and easy to prep for the GM!

thank you so much!

Hey, did you know there's a review video on this RPG? Go check it out!

Just read the LUMEN SRD and it seems super cool! I've heard this described as a sort of sequel to Light and I'm not sure exactly what that means. Do they both have strong suits or is Nova designed as a complete improvement on Light?

Edit: having read some posts on Patreon it looks like they're being developed concurrently so I'll assume they serve different purposes. Looking forward to learning more!

Gonna try running this as a One Shot with my group tonight, I'll be sure to post some deets about how it goes.

Changed it from what?

The probabilities are different between Light and Nova, I was just wondering if there was a reason.

NOVA's range is based on the LUMEN system, which was an evolution of LIGHT.

The design is to make the characters more consistently successful and feeling powerful.

The site to buy a hard copy appears to be down. FYI!

Thanks for the heads up! I just updated it.

Does Engulf power(p.14) deal 1 Harm to anyone Close to the target , including allies?

Erupt deals 1 to everyone around the target, allies included

I don't have the game, but am curious. What happens if a spark runs out of fuel. Are there options for combat they can do without fuel or they have to "power down" and wait for some fuel to drop?

Hi! If a Spark runs out of fuel, they have two options. One, they can grab some fuel that drops, like you mentioned. Two, they can continue to do things in combat that aren't Powers by doing any actions that could be resolved by rolling their Attributes! Lift up a heavy rock and throw it with Sun for example.

Gotcha. that makes sense. thank you

I'm sooo happy to have found Nova and realising where it all came from. Don't ask me why but I just love turning  into ttrpg some of those shooter games that have no brain but great lore. I've hacked dozens of rule systems to make some crazy as f***  rpg thing with big guns jumping all around. Sometimes it was good, often quite bad. But with Nova you've got me pumped up . I dunno what I'll be ripping next, but I sure will be. Thanks again and kuddos to you.  In the end you win ;)

And thank you for making such a wonderful game!

1. They start with 2, but can have more as they earn more mods.

2. A power mod is installed on a specific power, so it only affects that power, not all of them.

3. Exactly right, to get to Bullet Hell faster!

4. They do not go dormant after Bullet Hell.

Is there any reason you would ever want to take Smaller Tank instead of just having a fuel maximum of two?

A very cool and dynamic game!

thank you for the kind words!

In the first nine pages, this book manages to:

Thank you SO MUCH for your kind words! I'm so glad to hear the game is hitting right away in those first few pages. 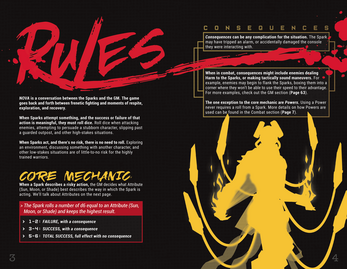 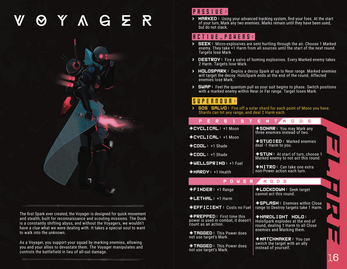 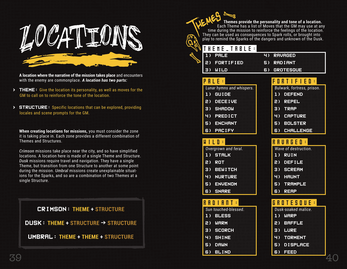 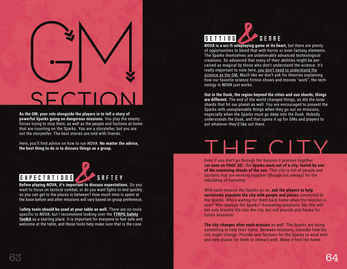