A “Doctor” in The City is probably the last person you want to see when you’re feeling ill. These masked individuals arrive on the sound of flapping wings, ready to cure what ails you, even if you think nothing is wrong. Rumors have been going around of “Doctors” who think the monster problem in The City is a disease, and they have taken up Slaying as the cure.

This is the first official class supplement for the Slayers RPG! Normally "Doctors" are terrifying monsters that the Slayers have to hunt, or at least fight through, but this one is different...This monster wants to join the hunt.

Included is the character rules, advances, and sheet unique to the "Doctor" class, in both A5 and Letter size.

This class was made using the official Slayers Creator Kit, a free resource filled with guidelines and templates for creating your own Slayers content. Grab it today, and join the community of designers working on this game!

I love the mechanics and aesthetics of this class, but there's a part of it that I have a question about.

The Doctor's Plague Pool is equal to your Mend "skill die score". Does this mean that if your Mend skill die is a d6, you have 6 dice in your Plague Pool?

Thank you very much for your work!

I wanna run one-shot with it and plan to add Doctor.

But can't understand one moment about Plague.

Does Plague pool refill at the beginning of rach new combat? Or its one pool for all game?

And active part of Plague:

For example, if i have one ally and one monster after me, so i can decide to put dice on monster and don't put it on ally. Or I should decide "put/don't put" for all characters after me in one moment?

1. It refills each combat!

2. You do it separately, on whichever characters you want to put it on! 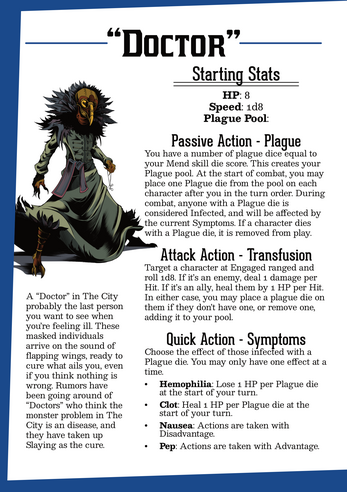 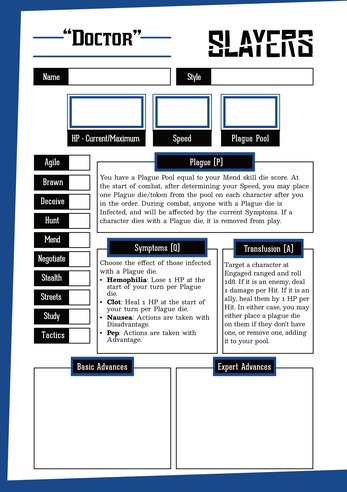