Not to you, but the iron hanging on your hip.

Drifters is a tabletop RPG of cursed gunslingers, wandering the wastes of the frontier in search of problems, and purpose.

Carrying a capital-G Gun, you have been granted near immortality. It only costs everything in return.

Drift now, your voidborn Gun draws you down the road.

Drifters is a hack of the Slayers RPG. Taking inspirations from Slayers, Drifters will have asymmetric gun classes, all united by the Rule of 4+. This gives each player at the table a unique experience with the game, while keeping play quick and fun!

One big departure from Slayers is the inclusion of two-part characters. A Drifter is made up of a Background and their Gun. Their Background gives them powerful abilities to use outside of combat, while their Gun provides unique gameplay mechanics to set your Drifter apart from the others.

Drifters tells stories of your immortal gunslingers and their journeys across the wastes. As Drifters wander into town, they'll soon discover that things aren't right. It's up to the Drifters to root out the issues of the town, and put them down with the help of their whispering Gun.

Drifters uses a new system for going on missions that evolves the Hunt structure from Slayers. Drifters explore towns and do Patrol work to slowly discover and wear away the corruption at the town's heart. When they are ready, the Drifters can face the presence, hoping they've done enough to prepare themselves!

Dirfters is a complete standalone game. Inside you'll find:

Each Gun in Slayers has entirely unique mechanics. While they are all united in the Rule of 4+ to quickly determine success or failure, how they interact with that rule is quite different! Asymmetry at its best.

The Revolver is carved with magical runes. As you carve runes in each chamber of your Gun, they provide ongoing passive bonuses as long as you have a bullet loaded in it, and then a devastating effect when you fire that bullet. Manage your bullets wisely, deciding when and where to reload is the key to your success.

The Shotgun doesn't fail, how could it? Instead, knowing you will always hit your target, the fun comes in determine what that success looks like. Using two different X-Y axis tables, you will roll and then place your dice on various outcomes to craft the perfect shot every time you pull the trigger.

The Rifle is all about warming up to that perfect shot. The longer you are in combat, the more you begin to hone in on that especially devastating moment. The Rifle thrives on building to a critical hit. Not only that, but your Gun has given you voidsight, allowing you to spot and mark enemies for your fellow Drifters.

Keep your eyes peeled. There just might be a bonus Gun coming on the horizon...

We did a quick demo of Drifters on stream, and you can check out the video below!

You'll see that there are two versions of Drifters that you can download: High Noon and Full Moon. These two versions are the exact same game, just with a different color for the front and back covers. I couldn't decide which to do, so I released both!

Credit goes to Aaron Jolliffe for the idea.

A print edition of Drifters is in the works, and will be available for preorder in early 2022. Both the High Noon and Full Moon covers will be available. Folks who purchase Drifters here on itch will receive an email when the preorders open up, which will include a coupon code to get it at a discount!

Like all of my games, Drifters was first released to supporters of my Patreon! They saw early drafts of the rules as well as PDF. They will also see the new Gun classes first, as they are being developed. If you want early access to all of my games before they get released, consider becoming a Patron today.

Drifters gets its inspiration from a number of games and pieces of media.

If you enjoy Drifters, please consider leaving a 5 star rating here on itch. It helps get the game in front of more folks!

In order to download this roleplaying game you must purchase it at or above the minimum price of $10 USD. You will get access to the following files:

Support this roleplaying game at or above a special price point to receive something exclusive.

Grab a copy, and enjoy! If you do, please consider leaving the game a 5 start rating!

Bought this game, read through it, and started playing it with my regular group in one day! Super quick and easy to generate characters, INCREDIBLE setting and world building in a minimalist fashion that allows for a ton of interpretation and adaptation, and just good, good awesomely aesthetic art. If you like the Wild West, cursed objects, and having your PCs feeling compelled to do things by forces greater than themselves, you must check out this game. 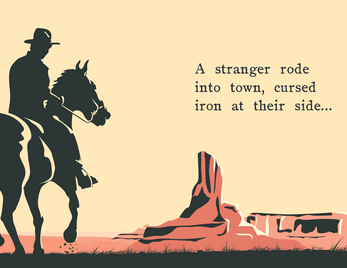 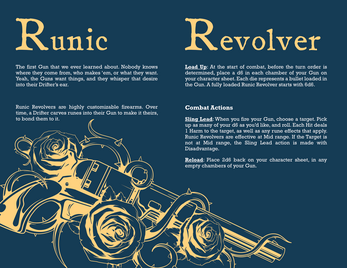 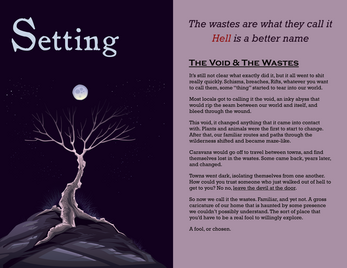 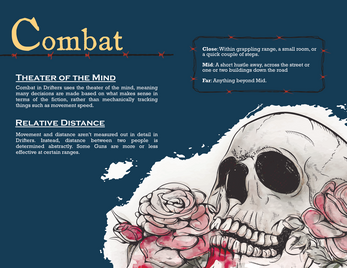 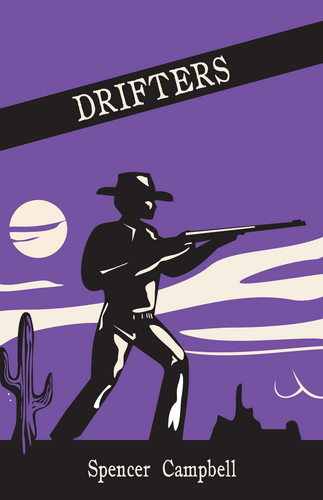 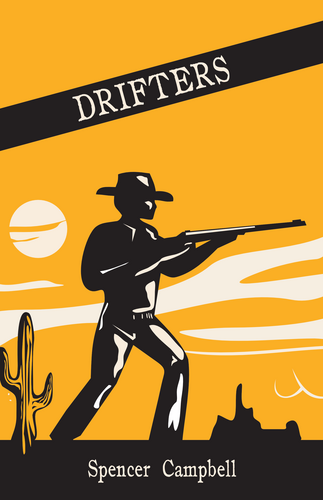